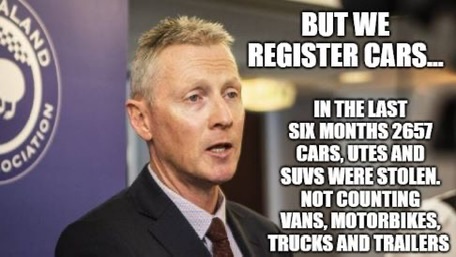 Appearing on News Talk ZB in response to reports of two more gang related shooting incidents in Wairoa, and the failure of people to report them, Police Association President Chris Cahill claimed “It’s why we’ve been arguing for so long about the need to have much better gun control in New Zealand because this is the outcome of it, it becomes the norm.”

We understand that Act MP Nicole Mckee introduced a Criminal Proceeds Revovery Amendment Bill into parliament last evening, which would allow police to seize the assets of gang members when they are found in unlawful possession of a firearm. This would hit gangs where it hurts, in their wallets, however the government did not support such a practical measured and voted it down.

As Forsyth says “with gangs growing faster than our police force, we need the public to be the eyes and ears for the cops in order to keep us all safe, and at the same time for our government to pass practical laws that reduces crime rather than further political ideology as has been the case to date.

Why take our tools of the trade? A Wairarapa perspective.
Scroll to top